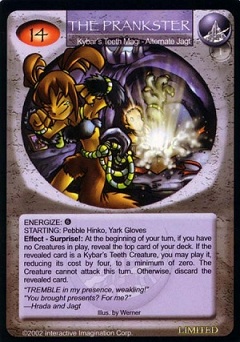 "Your PRANKSTER'S GAMBIT plunges to an all time low. You cannot hope to defeat Egbert in a prank-off. He is simply the best there is."
— Homestuck

A person who loves practical jokes more than just a friend, and will not be selective about who they choose for a target - in fact, a success record with as many people on it as possible seems to be one of their life goals. They will be the constant annoyance of their friends, albeit humored and tolerated, akin to the Lovable Rogue. Using their tricks against the villain will usually be their Moment of Awesome that makes you forgive them for the rest.

April Fools' Day will be their favourite day of the year when they are even more out of control than usual (and sometimes it will be their actual birthday).

Occasionally someone will decide to teach the prankster a lesson and give him a taste of his own medicine, which will often expose him as a hypocrite who is unable to laugh at himself (although there are genuine jokesters who enjoy a good joke even when it is on them), but note that more than one practical joker on the block for any longer duration will quickly lead to an Escalating War.

Usually there will be at least one episode where the prankster's behavior ends up backfiring on him - maybe they go too far and actually harm someone or they are thought to be joking even when they are not. Having the prankster lose his trademark behavior is a clear sign that your story has just become Darker and Edgier.

Prince of Pranksters is basically the uber version of this character. Compare The Jester. Sometimes also a Pungeon Master. See also The Trickster.

Oh what fun to make glum!

Oh what fun to make glum!