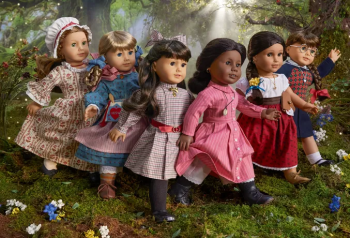 The American Girls Collection — generally referred to as American Girl — is a collection of dolls and books that show history in various time periods ranging from Colonial America to The '80s — all through the eyes of the average nine-year-old girl. They also have and have had a number of other lines.

Since 2001, there has been a "Girl of the Year" (GOTY), a 9-to-13-year-old girl who represents the year she came out. Initially, they were just "limited edition modern girls," only gaining the one-a-year schedule with Marisol. Girls of the Year include:

Advertisement:
Girls of the Year

In 2021, American Girl introduced the World by Us line, featuring three best friend characters focusing on social justice issues. Similar to the Contemporary Characters, they are older than the 10-year-old characters and are not limited to one year.

Advertisement:
World by Us