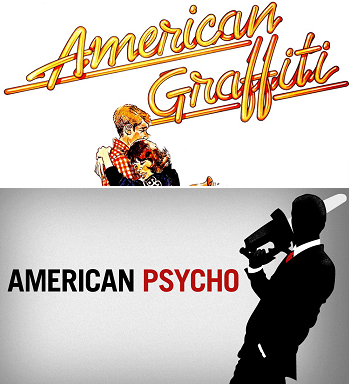 When the demonym for the United States of America is used as a naming convention.

There is a certain hard-to-describe quality in the idea of something being "American". Depending on how you look at it, it could connote Truth, Justice, wholesome family values, apple pies, and soda shops; or it can imply a wild, free-spirited nature unbound by Old World traditions. So it's only natural that some American works will put "American" in their title as a way to signify the feelings they wish to invoke.

But, as some people would notice later, there are some Unfortunate Implications in including the word "American" as some sort of superlative; thus, much like Eagleland, this trope has a dark underbelly. It is just as likely that you'll see an American Title in an ironic fashion, subverting the original meanings, or revealing the darker undersides of the bright ideology. This is often done in reference to the USA's dark past (if historical) or the more controversial aspects of American culture and politics (if modern).

It's also possible that the term "American" refers only to the subject's place of origin and not any larger message. Generally, it's easy to tell by the context of the work which flavor they're going for.

Compare It Came from Beverly Hills. Contrast Eagle Land - this trope refers to titles that try to induce that American idea...in America!

Not to be confused with Market-Based Title, though some of such titles do retitle some films with "American" in it.

Of the subversive variety
Comic Books

Examples where the name only describes a nationality
Art