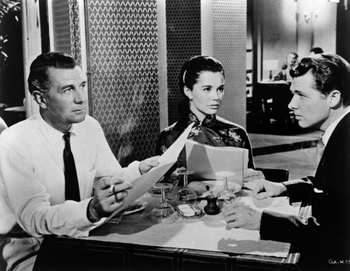 The Quiet American is a 1955 novel written by Graham Greene. It has twice been adapted to film: in 1958 by Joseph L. Mankiewicz, starring Michael Redgrave and Audie Murphy, and in 2002 by Phillip Noyce, starring Michael Caine and Brendan Fraser.

The story takes place in Indochina, during the last days of the French presence. The war for Vietnam's independence has been raging for years and the French are losing. Thomas Fowler is an aging and emotionally detached British journalist who treats his assignment in Saigon as a way to live in lazy self-indulgence, far from his wife and his boss; he has taken up a much younger Vietnamese girl, Phuong, as a mistress. He one day meets Alden Pyle, a young and idealistic American expatriate, ostensibly in Vietnam with a medical mission. Pyle begins to compete with Fowler for the attention of Phuong.

Examples specific to the 1958 film adaptation:

Examples specific to the 2002 film adaptation: