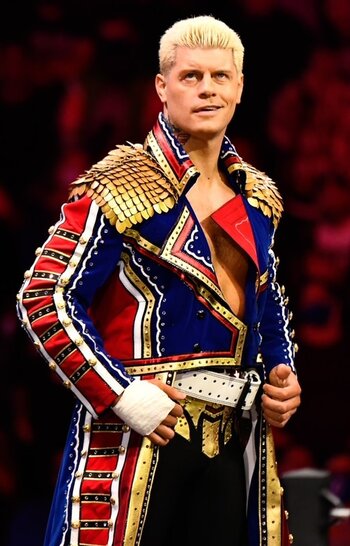 The American Nightmare.
"I'm the least Rhodes of the Rhodes, but if you give me a pair of boots, I've got the basics."
—AEW Double or Nothing 2019 PPV Promo
Advertisement:

"Wrestling has more than one royal family."

In 2016, after working two years under the alternate persona Stardust, Rhodes asked for and was granted his release from WWE. He has since embarked on a busy indie career, making appearances in Evolve, Pro Wrestling Guerilla, TNA, and various other indie promotions under the names Cody or Cody R (due to legal reasons, he could not use the Cody Rhodes name outside of WWE until November 2020, when he was introduced again as Cody Rhodes at Full Gear). He was announced to be the newest member of the Bullet Club in New Japan Pro-Wrestling as announced by the group's leader Kenny Omega, and made his debut for the faction in the January 4, 2017 Tokyo Dome show. Afterwards he, Omega and the Young Bucks became known as The Elite and eventually split off from Bullet Club.

Since then, describing his post-WWE career as "prolific" has been an understatement. Cody has since been traveling all across the world, increasing his stock, and becoming one of the biggest names in Independent Wrestling, winning World Championships and (alongside The Young Bucks) being behind All In, one of the most ambitious shows in all of Professional Wrestling. With each passing success Cody has had, it seems like the sky is the limit for him. Most recently, he and The Young Bucks co-founded All Elite Wrestling with financial backing from the owners of the NFL's Jacksonville Jaguars, with the first shows run in 2019.

In 2022, after having been working AEW shows without a contract for the past few months, it was announced that Cody would be leaving AEW, alongside his wife Brandi, making him a free agent. At WrestleMania 38, he has officially come back to WWE, facing Seth Rollins in his return match.

Adrenaline, in my soul, every trope out of control:

"WHOOOAH-OH! YOU'RE ONLY SMOKE AND MIRRORS TO ME!"