I Am Not Pretty 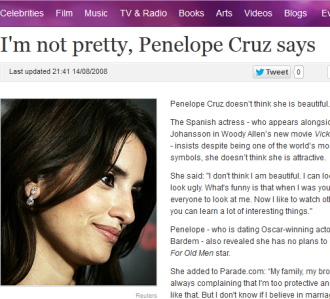 You're looking at the one person who thinks so.
Tris: But I'm not pretty.
Tobias: No, you're not and I would only go to your funeral if there was cake.
— Divergent
Advertisement:

When a girl (or, in some cases, a guy), regardless of their looks, believes herself to be unattractive. Usually, it's because they're lacking in conventional beauty, but it's rare for them to actually be ugly. Tomboys and Girl Next Door types are especially prone to believing this when comparing themselves to other women, who have more feminine qualities. At least, until someone dolls them up, or helps them see that they're perfectly fine as they are.

Amazonian types may feel the same way, because they often think guys aren't into them. As are pettankos, who may feel inferior to other girls' endowments. While for others, it may have to do with being over their 'ideal weight'.

Sometimes she might be a standard beauty, but feels unattractive because she's the wrong kind of beautiful. A girl with Raven Hair, Ivory Skin who's an absolute knockout to anyone with eyes might still feel she's unattractive because she's told the "ideal" is blue-eyed blonde. This one is especially common in the U.S.; the standard of beauty is an ideal that could be considered Northern European (blonde hair, blue eyes, tan complexion), which leaves a lot of girls in minority groups feeling this way (Cher, for instance, has said in the past that she grew up feeling like she could never be beautiful because she wasn't blonde.)

This is often the basis behind a Beautiful All Along or She Cleans Up Nicely event; when a character who is seen (rightly or wrongly) as unattractive is gussied up and made the 'Belle of the Ball'. However, the main issue at hand is not how other characters see her, but the fact that she sees herself as unattractive. If the girl can realize her worth and attractiveness without a makeover, so much the better.

Subtrope of Appearance Angst. Compare Obliviously Beautiful, where an attractive character is simply unaware of their beauty. Related to Hollywood Homely, where we're either told that the girl is unattractive, or the rest of the cast simply acts as if she is. With Suetiful All Along, the author insists the character isn't pretty at the outset, yet lavishes complimentary descriptions on her the rest of the time.

May occasionally be deliberately invoked as a form of Self-Deprecation or Compliment Fishing. But it can often be Truth in Television, if the girl in question has a poor self-image and/or unrealistic ideas of what constitutes beauty.