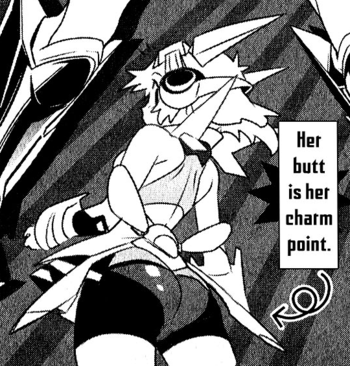 Sometimes it's made explicit.

A charm point (Japanese: チャームポイント) is a coveted and well-tended accessory of a character (often a flaw) that makes them attractive or at least interesting to other characters, if only in their own head. This can be anything: a well-groomed mustache, a bizarre body part, a favorite hat, a personality trait, or a bow tie. For maximum humor, the actual draw of the thing in question may be completely non-intuitive to the audience, but make perfect sense to whatever minor passerby appears on the show.

At some point in the story, the character may lose it (or someone else does) and rapidly become inept or clumsy at whatever they usually did with ease, while everyone would notice something is 'off' about him. Thus the thing takes on a Magic Feather effect, even when they're reassured by the cast that it shouldn't make any difference. Whether or not they learn an Aesop about it has no effect in their immediately retaking it once it's accessible again.