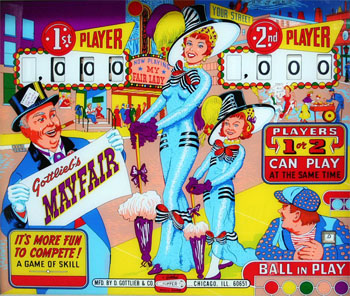 I'm a good pin, I am!
Advertisement:

Mayfair is an electro-mechanical pinball game designed by Ed Krynski with art by Roy Parker. Released by Gottlieb in 1966, it is an unofficial adaptation of the 1964 film adaptation of My Fair Lady starring Audrey Hepburn.

Compared to other electro-mechanical tables, Mayfair is relatively sophisticated, with several ways for players to score points. The obvious way is to hit the left and right rollovers to light up the bumpers for larger points; skilled players, however, will advance the Red and Yellow bonuses up the playfield, then hit the pivoting target to collect the Double Bonus, making use of the two "auto shooters" between the flippers to propel the ball at it.

Mayfair was a fairly successful title for Gottlieb, selling over 2,000 units; several hundred more were sold in add-a-ball and Italian versions under the name "Hyde Park".

Art historians will note that Mayfair was the last game illustrated by pinball artist Roy Parker before he passed away; the game was released posthumously a year after his death. Trivia buffs will note that this is the second pinball table based on My Fair Lady; previously, Gottlieb had released "Fair Lady" in 1956, based on the hit Broadway musical with Rex Harrison and Julie Andrews.