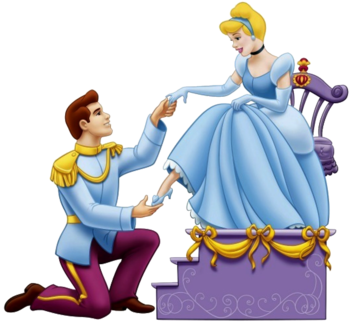 The prince went to meet her, took her by the hand and danced with her. He would dance with no other maiden, and never left loose of her hand, and if any one else came to invite her, he said, "This is my partner."
— The Brothers Grimm, "Aschenputtel,"

Ground zero for all Princely Tropes, or what comes to mind when we think of a prince.

He's an aristocrat with a magnetic personality, probably dashing, brave, gallant, and kind, a true prince. In Fairy Tales, he often rescues the Damsel in Distress and marries her to live Happily Ever After. If he's saving himself for his true princess he'll be her Celibate Hero but if he's more interested in impressing the ladies with his father's money, he's a Millionaire Playboy.

Except, actually, all the princes in those tales were very seldom named. It was simply a "prince" or "king" or royalty of some sort. And when they did have names, they were genuine, even commonplace, names: John, Ivan, Jean, Hans, etc.

The term Prince Charming actually originates from an 1889 translation of Le roi Charmant, the Charming King, and then a year later the phrase "Prince Charming" was used in The Picture of Dorian Gray.

Nowadays, the classic Prince Charming is almost never used, possibly because the Ruritanias which he often hailed from have largely abandoned monarchy, or joined the EU. The trope has been subverted, double subverted, inverted, averted, diverted, converted, and perverted (and ridiculed, but that's nothing to be scared of). Nowadays, the Prince is often Prince Charmless — a Jerkass, Smug Snake, or downright evil. Possibly, he'll be naive or selfish.

It's only the rarest of instances where he can be played straight and done right. And under those circumstances he will be given his own name, and not called Prince Charming. "Prince Charming" is guaranteed to be a subversion. When he does have charm he can be found practicing Old-School Chivalry. In most instances, he will start out with some flaws and undergo Character Development to earn his "Prince Charming" status.

When not referring to a royal prince, the concept refers to a young man with the charm of a rich boy. Contrast the bad boy charm of All Girls Want Bad Boys.

The Spear Counterpart to Princess Classic.

In terms of the ranks of Authority Tropes, the tropes that are equal are The Evil Prince, Prince Charmless, Warrior Prince, Sheltered Aristocrat, The Wise Prince, and all Princess Tropes. The next steps down are The Good Chancellor, Standard Royal Court and Deadly Decadent Court. The next steps up are The Caligula, The Good King, God Save Us from the Queen!, The High Queen, and The Woman Wearing the Queenly Mask.