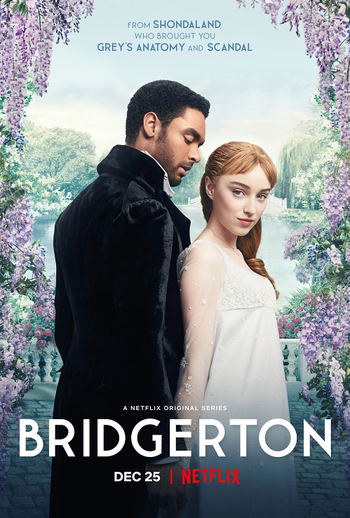 "There is nothing you cannot do. You are a Bridgerton."
"All is fair in love and war, but some battles leave no victor, only a trail of broken hearts that makes us wonder if the price we pay is ever worth the fight."
— Lady Whistledown
Advertisement:

Bridgerton is a 2020 period drama created by Chris Van Dusen and produced by Shonda Rhimes for Netflix. It is an adaptation of the eponymous romance novel series by Julia Quinn.

The series takes place in Regency England, where the marriage mart is in full swing and young ladies and their families scheme for good matches. The plot revolves around the sons and daughters of the rich and respected Bridgerton clan as they find love and come of age. Among the family are eldest daughter Daphne (Phoebe Dynevor), a debutante set to find her match in the new season; oldest brother Anthony (Jonathan Bailey), who tries to balance his lordship duties with his personal desires; second and third sons Benedict (Luke Thompson) and Colin (Luke Newton), who want to find their own ways in life; and younger sister Eloise (Claudia Jessie), disdainful of the marriage mart and the society that makes it.

Also in the mix are the Bridgertons' neighbour, the tasteless Lady Featherington (Polly Walker), has trouble finding matches for her three daughters, including the precocious misfit Penelope (Nicola Coughlan), and is further threatened by how her lovely but poor relative Marina (Ruby Barker) garners all the attention. Further complicating matters is the enigmatic Lady Whistledown (voiced by Julie Andrews), who narrates the series through her society papers that threaten to uncover secrets, scandals, and more.

The first season adapts the first book, The Duke and I, and follows newly-minted debutante Daphne, who sees her chances of finding a good husband begin to dim when her older brother Anthony shoots down all her suitors. In a bid to retain relevance, Daphne enters into a mutually beneficial fake courtship with her brother's friend, the dashing and eligible Duke of Hastings, Simon Basset (Regé-Jean Page). Simon refuses to get married, so this arrangement keeps people from throwing their daughters at him while raising interest in her. Naturally, they fall in love — but their burgeoning feelings for each other are threatened by their conflicting desires for the future.

The second season is based on the second book, The Viscount Who Loved Me, and is about Anthony, suddenly determined to find a suitable viscountess with whom he can have an amicable but loveless marriage. With his high standards, a perfect match seems impossible until the arrival of Edwina Sharma (Charithra Chandran). Anthony's attempts to court her are deterred by her older sister, Kate (Simone Ashley), who immediately butts heads with the Viscount. The competitive resentment between the two slowly turns into romance, but their trauma-induced fears and (often misguided) sense of duty to their families—and the impending marriage between Anthony and Edwina—keep the two apart.

The show debuted on December 25, 2020 on Netflix. The second season premiered on March 25, 2022. Netflix has also renewed the show for an additional two seasons.