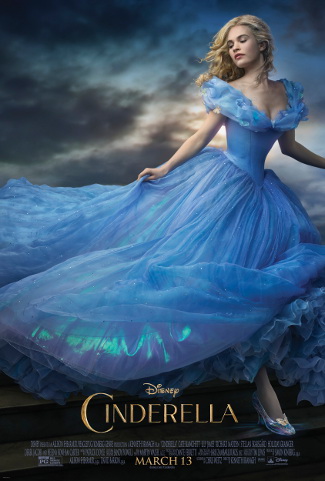 Cinderella is a 2015 Disney film based on the animated classic. It is directed by Kenneth Branagh, and its cast includes Lily James as Ella / "Cinderella", Cate Blanchett as Lady Tremaine / "The Wicked Stepmother", Richard Madden as Kit / "Prince Charming", Helena Bonham Carter as the Fairy Godmother, Stellan Skarsgård as the Grand Duke, Sir Derek Jacobi as the King and Hayley Atwell as Ella's birth mother.

You know the story: After an idyllic childhood with her parents, young Ella finds herself orphaned and trapped with a wretched stepfamily. Forced to be their servant, Ella struggles to keep up her courage in reverence of her lost mother. But after a chance encounter with a kind gentleman in the woods, followed by the announcement of a royal ball, Ella sets out to attend the ball in hopes of finding that kind friend who gave her hope again. The rest includes a fairy godmother, glass slippers, nasty siblings, magical mice and lizards, and a touching tale of true love amid hardship.

The film debuted on March 13, 2015. As a special promotion, Cinderella was preceded in theaters by the short film "Frozen Fever", a follow-up to Frozen.