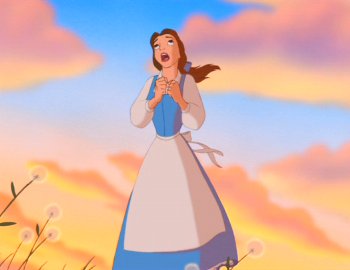 In most American musicals, the hero is a little guy (or girl) who doesn't amount to much right now, but dreams of a brighter future. Usually, they do this with an "I Want" Song, where they sing of how this little town is too small and they know there's a great big world out there for them. This is always so the audience can identify with them. Because the hero, just like you, isn't a movie star or a princess or anybody else officially special, but is really special deep down if they try, and (unlike those conformist drones around you) wants to try. The lyric to the song may well include the actual words "I want" or some variant thereof to hammer the point home.

If well written, the "I Want" Song can do an excellent job of establishing the character of the protagonist and their one burning desire that will motivate their actions from here on. (This motivation is particularly important given that they will often be asked to make difficult choices and sacrifices in order to achieve their goal, and their response to those choices will become a mark of their moral development.) Plot-wise, it can fit nicely into The Hero's Journey story archetype just before the Call to Adventure, where the hero is dissatisfied with the ordinary.

If written badly, however, the lyrics may convey only the vaguest sense of longing that allows nearly anyone in the audience to associate with the hero by proxy, but doesn't establish enough to motivate the plot. This gets even worse if the hero doesn't actually do anything to achieve their dreams, but happens to stumble into something big later. A lot of writers realize this, because the I Want Song is the single biggest target for a Dark Reprise. If there isn't a song specifically for the most unhappy part of the hero's life (usually halfway through Act II), it will be a Dark Reprise of their earlier song. Alternatively, if / when they achieve their goal, they may sing a triumphant reprise of their I Want song upon doing so at the very end of the story.

Some musicals use this song as an opportunity for social commentary, focusing almost as much on what the characters are trying to escape (usually crushing poverty) as on what they're trying to achieve. In many older musicals, however, the song is about nothing more dramatic than the heroine's romantic fantasies.

A variant (which can be either vague or specific) is the bittersweet I Want Song, which is not about feeling elated with the hero, but about turning them into The Woobie. If the song is vague, it shows that they've been crushed by life and can't even imagine a better world. If the song is specific, what they want is absurdly small or big, to show how their awful life has made it impossible to have a sense of proportion. This is not to be confused with a straightforward song about their rotten life, like "Hasa Diga Eebowai" from The Book of Mormon.

It can easily be argued that any song in a book musical can be interpreted as an "I Want" song. Those who've studied musical theatre performance (or acting at all, for that matter) know that a character never opens their mouth onstage without an objective. In musical theatre, song is the method of communication of the characters' wants in that universe. No matter what… the person singing ALWAYS wants something. May overlap with Job Song if a person is singing about the job they want or about wanting something besides their job.