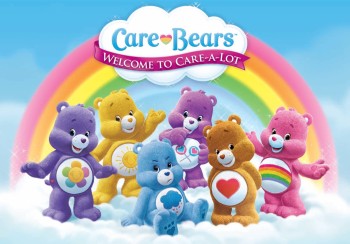 "They'll always be there!"
Advertisement:

Care Bears: Welcome to Care-a-Lot is a CGI-animated series airing on The Hub based on the highly popular Care Bears franchise. The series premiered on June 2, 2012.

The series follows in the vein of the previous Care Bears: Adventures in Care-a-Lot by featuring both episodes in which the Care Bears must help out real kids, but also includes those focusing solely on the bears themselves. Like the series before, the premise primarily centers around seven main characters: Tenderheart, Cheer, Grumpy, Funshine, Share, Harmony, and newcomer Wonderheart. The previously introduced character of Oopsy Bear has been eliminated, as well as the villain Grizzle and his robotic minions. The series instead features Beastly, a villainous minion from the 80s series who has become much more of a comic mischief-maker, accompanied by two little "Beasties." The series also restores Tenderheart Bear as the leader of the characters and introduces Tenderheart's niece, Wonderheart Bear, a Constantly Curious bear who doesn't quite know what her belly badge does, though she's trying hard to learn.

New episodes aired on Saturday mornings and repeats were seen throughout the week; episodes were presented in widescreen HD where available. Recent episodes could also viewed at The Hub's official website. The series only lasted one season of 26 episodes; after about a year with no new episodes, it was clear nothing new was in production. Hasbro's mismanagement of the Hub Network (and the franchise as a whole) effectively doomed the series and, in September 2014, it was announced that the network would become Discovery Family, dropping the show completely from its line-up. This was soon followed by an announcement

that a new series would air on Netflix, one featuring the Care Bear Cousins for the first time since the franchise was revived in 2000.