Western Animation / The Cat in the Hat Knows a Lot About That! 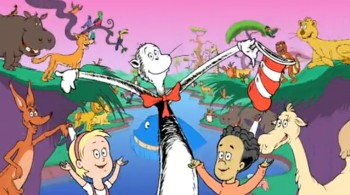 An Edutainment Show on PBS Kids starring The Cat in the Hat (voiced by Martin Short), Sally, her new best friend Nick and Fish, plus cameos from Thing One and Thing Two.

Each episode is composed of two twelve-minute stories, in which the Cat helps solve the children's problems by whisking them off in his helicopter-esque Thingamajigger to experience a relevant aspect of the natural world. This usually involves meeting and learning from an exotic animal, bird or insect.

The series is based loosely on a franchise of books called The Cat in the Hat's Learning Library, which was later retitled to match the name of this television series.