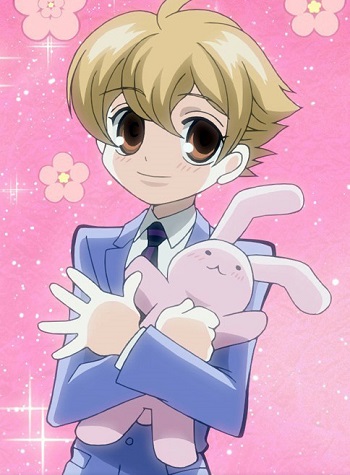 "BUNNYYYYYYYYYYY!!!!"
— Behemoth upon seeing the Easter Bunny, The Nightmare Before Christmas
Advertisement:

With their long ears, twitchy noses, and rounded fluffy bodies, bunnies are often used in media to invoke feelings of sweetness, innocence, childishness and general cuteness. Real rabbits can be used for this, but so can stuffed rabbits or other types of toy rabbits or rabbit related accessories. Characters meant to be viewed as cute might have a rabbit-related Animal Motif. Very energetic personalities and Nice Guy (or Nice Girl) personalities are often common with these characters.

Stuffed bunnies might also be used to invoke the concept of children caught in a horrific situation if used in an Empathy Doll Shot. Contrast Hair-Raising Hare and compare Playboy Bunny.

Not to be confused with Bridge Bunnies.