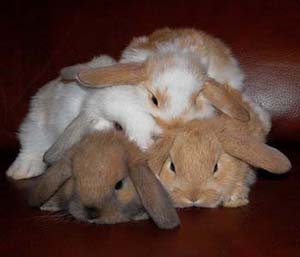 Needs more bunnies!
"Bunnies aren't just cute like everybody supposes
They got them hoppy legs and twitchy little noses
And what's with all the carrots?
What do they need such good eyesight for anyway?!
Bunnies! Bunnies! It must be bunnies!"
— Anya, Buffy the Vampire Slayer, "Once More with Feeling"
Advertisement:

This index is for tropes related to rabbits and hares. While rabbits and hares are different animals in Real Life, in fiction they are often treated similarly, and are sometimes regarded as one and the same.

Specific examples from works should be listed on the respective trope page. See The Other Wiki for a list of fictional rabbits and hares

and The House Rabbit Society for another list of fictional and real famous rabbits.

Not to be confused with Plot Bunny, Bridge Bunny, Bunny-Ears Lawyer, Down the Rabbit Hole, Gym Bunny, Killer Rabbit, Call a Rabbit a "Smeerp" or Call a Smeerp a "Rabbit".

Tropes also associated with rabbits, but not exclusive to them: