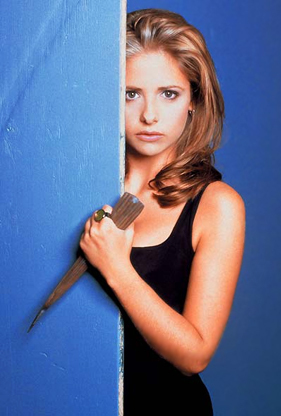 She's the thing that monsters have nightmares about.
Into every generation a Slayer is born: one girl in all the world, a Chosen One. She alone will wield the strength and skill to fight the vampires, demons, and the forces of darkness; to stop the spread of their evil and the swell of their numbers. She is the Slayer.
Advertisement:

Bluntly put, this show is why TV Tropes exists.

In 1992, the film Buffy the Vampire Slayer, written by Joss Whedon, played with a bog-standard trope: the fragile (and doomed) blonde Damsel in Distress cheerleader attacked by monsters in a dark alley. In a postmodern twist, the blonde cheerleader is the "Slayer," a powerful warrior that the monsters are afraid of meeting in dark alleys. Since Whedon, a mere writer, lacked creative control over his work, he viewed the actual film as a disappointmentnote His intent was for the film to have some self-referential comedy but still be a largely serious take on the genre; the producers made it more campy and incorporated slapstick. He did love the original concept and the film did end up a Cult Classic, so when he was given the opportunity to revisit it as a television series a few years later, he wasted no time saying "yes."

Nobody can deny or ignore the influence of Buffy on the TV shows that followed it, both within and outside the genre. (Russell T Davies had at least one eye on this show when he revived Doctor Who - and Angel when he created its more adult spin-off, Torchwood.) This series has become one of the most Trope Overdosed and Lampshaded shows in existence — thousands of references to Buffy exist across this entire wiki — partially because TV Tropes began with a specific focus on Buffy (based on a 2004 thread on the fan site Buffistas.org) before branching out to all of TV and eventually all of everything. This show is considered Trope Overdosed and part of the Truly Awesome. With over 9,000 wicks and a runtime of 6,056 minutes, this page (well, this entry and its metapages) now has over one wick per minute.

In 2007 Buffy started up again — in comic form. Produced by Joss Whedon, it encompasses four "Seasons" of TV time, ultimately coming to an end in 2018 due to Dark Horse comics losing the license which in turn finally ended the original continuity of the series. Boom! Studios picks it up later and initiated a full Continuity Reboot to begin in 2019. In 2011, the mainline series branched off into Angel & Faith, which is London-based (in a nod to Excalibur).