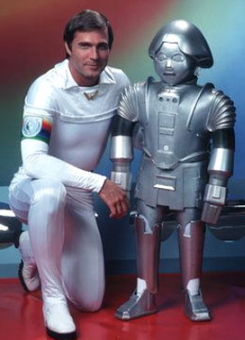 "[This] little droid and I have been through a lot together."
"Did you have fun with your Robot Buddy?"
— Homer Simpson (asking Lisa after talking with Stephen Hawking), The Simpsons
Advertisement:

The character is an artificially intelligent robot.

This kind of character is often small (anywhere between one and three feet tall), cute looking and has a million and one functions; if you need him to do a job, he has the right tool installed for it. Up to and including jet packs. Can sometimes be the scifi equivalent of a Familiar.

Typically, robot buddies are very loyal to their owners, requesting only proper maintenance like recharges and repairs. The trend in recent years is to make the Robot Buddy an obnoxious, cynical Deadpan Snarker, commenting on human foibles (or just those of the protagonist).

A bonus is that they can do a Heroic Sacrifice and still come back believably because Mr. Fixit can put him back together in the maintenance shop and upgrade him as a reward to be even better than before. The logical opposite to A.I. Is a Crapshoot (except when it isn't). Compare Robot Girl, Do-Anything Robot, Virtual Sidekick and Companion Cube. May also be an Amusing Alien. Not to be confused with the Nintendo Entertainment System peripheral the Robotic Operating Buddy. See also Robot Dog, the dog-shaped subtrope. Often overlaps with Funny Robot. May be the Kid-Appeal Character, and may also overlap with Gratuitous Animal Sidekick when the robot is animal-like.

Team Pet is the animal equivalent to this, and Tagalong Kid is the human equivalent.

To the Robinsons, but especially Wilbur. He is considered part of the family, even if he's not blood related, and is treated like a Robinson.

To the Robinsons, but especially Wilbur. He is considered part of the family, even if he's not blood related, and is treated like a Robinson.