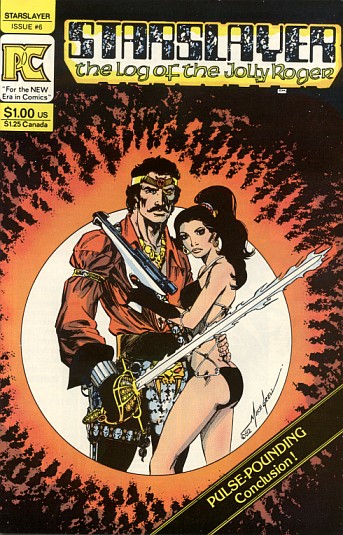 Starslayer: The Log of the Jolly Roger was an American comic book series created by Mike Grell. It was published first as a six issue limited series by Pacific Comics, and then as an ongoing series by First Comics; running for 34 issues in total. In 1995, Grell released an expanded version of the original limited series through Acclaim Comics. The expanded version, titled Starslayer: The Director's Cut, ran for eight issues.

The first six issue limited series introduces the main character Torin Mac Quillon, a Celtic warrior from the time of the Roman Empire. Just before he is killed while fighting a group of Roman soldiers, he is pulled into the distant future by Tamara, a descendant of his wife after she remarried. Torin is asked to join the crew of the spaceship Jolly Roger in their fight against the oppressive regime that is ruling the Earth. Torin agrees, and he and his new shipmates successfully save the Earth's dying sun by the end of the first series.

When First Comics restarted the series, Torin and his crewmates travel throughout the galaxy and end up in Cynosure, the nexus of all realities for First Comics, and gain a crew of pirates. At some point Torin travels back to the solar system with a device that can cause a star to implode into a black hole. He uses this weapon on the sun in the course of battle to destroy his enemies. Just at the point of implosion Torin speaks the name of the Celtic goddess of death, Morrigan, effectively sacrificing the star to her, which brings her back into existence. She proclaims Torin to be her avatar and orders him to go into the galaxy and kill in her name. Torin rebels, which is the basis of the remainder of the title's run.

Groo the Wanderer started as a back-up feature in Starslayer.