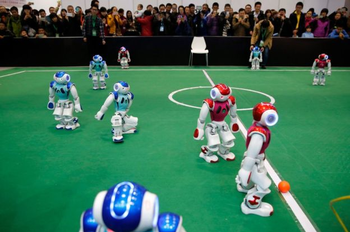 In the future, robots are projected to have all kinds of uses: science, engineering, and... sports?

Speculative Fiction frequently uses shorthand for the audience to know it's The Future, and there's often no better way than demonstrating something high tech being used for Mundane Utility. In comes the robots which are widespread enough to cater to an entire entertainment industry. Whether they're the center of the work, used for a one off gag, or using sports as a visual motif these robots are a spectator sport regardless of whether they're fully autonomous or piloted by humans.