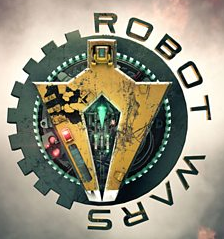 A British television show about fighting robots. The original run aired from 1997 to 2004, airing seven series (each comprising one UK championship, with a few sideshow tournaments and specials in most series) plus two series of "Robot Wars Extreme", a house show-esque format featuring several different events and mini-tournaments. The first 6 (and the two Extremes) aired on BBC2 while the last season aired on Channel 5. The latter channel's treatment of the show proved to be the death of it, but it lived on in repeats and live events organised by the roboteers. In 2016, a new 6-part series aired on BBC 2 and ended a hiatus of more than a decade; the revival lasted for two more series in 2017, but was cancelled

During the height of its fame, the show had two seasons and a Nickelodeon Kids' Series involving mainly US robots (called Robot Wars: Extreme Warriors and Nickelodeon Robot Wars respectively), two seasons involving robots from the Netherlands and Belgium (called Robot Wars: The Dutch Battles), and a German language single Series (named Robot Wars: The German Struggles) involving 12 robots from Germany, the Netherlands and Switzerland, which were broadcast in their native languages and used local Presenters and pit reporters. All series took place in the UK arena and used UK house robots (and the final UK series involved many big-name Dutch, Belgian and German robots). Most of the episodes are available on YouTube and, if you live in the UK, Challenge is showing reruns of all series bar 1, 3 and 4, with H2 showing Series 3 and 4. In addition, the UK version also spawned a Spin-Off, Techno Games, which ran for four series and was effectively a robotic Olympiad, featuring many of the same teams with new robots and sharing lots of personnel with the parent show.

The first season was hosted by Jeremy Clarkson, but later seasons were hosted by Craig Charles, who was more suited for this, with the 2016 revival fronted by comedian (and physicist) Dara Ó Briain. The show was originally a mix of fighting and various "trials" (games such as pinball, sumo, obstacle courses, etc.); later on, more emphasis was put on the former, with the trials first being demoted to sideshow tournaments, and by Series 5 the format was entirely combat-based.

Not to be confused with Super Robot Wars (which was, for a time, renamed "Super Robot Taisen" outside of Japan due to the show), or with the American series BattleBots with which it shares a common ancestor in the form of underground American competitions in the early 1990's. No relation at all with the 1993 Giant Mecha movie of the same name. If you're looking for a trope about wars against robots, that's Robot War.

The TV show provides examples of:

All Track-tion did during it's redemption fight against Apex is move a little, while Apex hits it's wedge, and then explodes.

Example of:
Wins by Doing Absolutely Nothing

All Track-tion did during it's redemption fight against Apex is move a little, while Apex hits it's wedge, and then explodes.