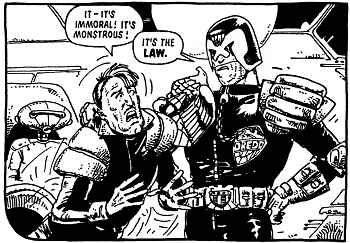 The law is the law. And Dredd is the law.
"No. Not even in the face of Armageddon. Never compromise."
— Rorschach, Watchmen
Advertisement:

A character who cares too much about their principles, often at the expense of caring about the results of their actions. While many characters believe in ideals like truth, knowledge and the rule of law, these folks take it to uncomfortable levels. May be Played for Laughs, or played straight in one way or another.

A person who Will Not Tell a Lie, for example, crosses over into Principles Zealot when they maintain truthfulness even in the face of horrible consequences that they know could be averted by telling a Jedi Truth- or force everyone to tell the truth lest they suffer dire consequences. A hero who will commit any atrocity rather than break a promise, even if they were tricked into making it, is a Principles Zealot. Please note that such a Principles Zealot isn't necessarily more principled than someone who normally Will Not Tell a Lie but can make exceptions in extreme cases. The difference is that the zealot refuses to see the big picture, clinging blindly to the principle and the principle only. This has a certain bloody-minded logic: the threat of looming negative consequences could always be a trick or illusion, or there might be an escape route, but once you tell the lie to avoid it, there's a 100% certainty that you are now a liar. Psychologically, categorical imperatives can also be a source of immense power.

A Principles Zealot can be a Well-Intentioned Extremist, Broken-System Dogmatist, Knight in Sour Armor, Knight Templar, Lawful Stupid, or even someone who ended up on the wrong end of that Sliding Scale. Contrast Totalitarian Utilitarian, who is another side of these four kinds of fanaticism: While the Principles Zealot cares only about principles, the Totalitarian Utilitarian cares only about results. Note that a fanatic doesn't have to fall into either of those two categories: their fanaticism can be about a cause or a belief instead.

Things can get really ugly when this character suffers from Black-and-White Insanity.