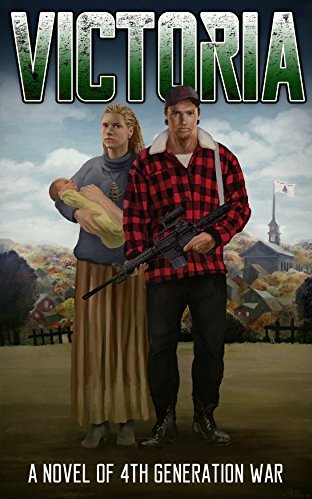 Yes, that is a grenade on the mother's necklace.
Was the dissolution of the United States inevitable?
Probably, once all the "diversity" and "multiculturalism" crap got started. Right up to the end the coins carried the motto, E Pluribus Unum, just as the last dreadnought of the Imperial and Royal Austro-Hungarian Navy was the Viribus Unitis. But the reality for both was Ex Uno, Plura.
It's odd how clearly the American century is marked: 1865 to 1965. As the 20th century historian Shelby Foote noted, the first Civil War made us one nation. In 1860, we wrote, "the United States are." By the end of the war, the verb was singular: "the United States is." After 1965 and another war we disunited—deconstructed—with equal speed into blacks, whites, Hispanics, women, gays, victims, oppressors, left-handed albinos with congenital halitosis, you name it. The homosexuals said silence = death. Nature replied, diversity = war.
Advertisement:

Victoria: A Novel of 4th Generation War is a novel by military theorist and paleoconservative William S. Lind (published in 2014 under the penname Thomas Hobbes) in which, 20 Minutes into the Future, the United States breaks up into a series of warring successor states, including the Northern Confederation (eventually renamed Victoria) in New England.

The story is told from the perspective of John Rumford, a USMC captain discharged when he refuses to allow a woman to honor their dead by saying "Iwo Jima" (because no women Marines fought on Iwo Jima, and so he and his buddies feel they do not deserve to participate). After having trouble farming and working, due to government regulations, Rumford forms a group, the Christian Marines, to fight for traditional Christian values in an increasingly multicultural and tolerant society. Eventually, he becomes one of the leaders of the growing movement to restore America to an idealized version of 1930s values. "Retroculture," it is called.

Then the first shots of the Second Civil War are fired, and things get really crazy....

The book contains many hardcore paleoconservative

talking points and holds nothing back in presenting its radical vision and condemnation of political correctness. As depicted herein: atheists are either stupid or evil (or both), homosexuals are perverts, academia is heavily infiltrated by Cultural Marxist

conspirators, UN-appointed Muslim peacekeepers want nothing more than to kill or enslave Christians, Mexican cartels raid America to sacrifice white people to their pagan gods, women should be subordinate to men, and so on and so forth.

Compare The Turner Diaries, a more infamous and much more extreme novel that advocates for a neo-Nazi dictatorship and the complete genocide of non-white races rather than extremely reactionary and religious-centric right-wing populism. Contrast Christian Nation and After the Revolution, similarly speculative political novels featuring an oppressive, near-future American government with its own La Résistance valiantly fighting back ... but from a standpoint politically opposite to Victoria.