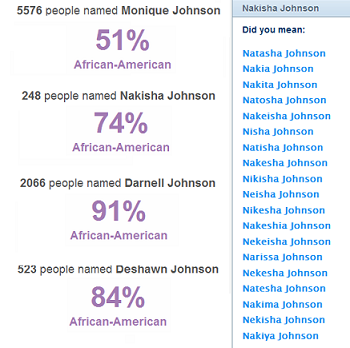 "If you watch enough Maury Povich, you're going to run across an episode in which a guest comes on stage whose name is Shaneequa. Or Jamarcus. Or Trevian. I'm not even going to ask you what race you think these three people are, because we all know what everyone else is thinking, and right here is where some people start feeling uncomfortable."
— Cracked, "4 Situations That Make White People Feel Racist"

The polar opposite of Preppy Name and Hayseed Name — but somehow, they're not that different...

Over the last 30 years of the USA's history, a trend has cropped up among the country's poor — many of whom are descended from Africans — to give their kids weird and wonderful names. Many of said names are oddly and perhaps intentionally misspelled, not to mention unusually pronounced, and grandiose. The media finds this endlessly amusing, and names like this are now firmly tied to poverty stereotype.

Although it must be noted, not all of these names are just "made up out of nowhere". Most of these names, for example may have a French/Creole origin or inspiration (using prefixes such as Le', De', Fa'), or may have been taken from Arabic (Latifah, Hakeem, Jamal) or even Swahili (Jabari, Imani).

The USA has several rather exclusive subcultures separated by racial distinctions, so expect poor people of white and African-American descent to have rather different names (the USA's white poor tend to have more plain, but no less strange and silly-sounding, names like "Cletus" and "Billy Bob"). If you see anyone with a name like "Sha'quayla Joniqua LeBrontayyy" in a comedy, she's almost automatically an Acceptable Target — quite probably a Fat Idiot Sassy Black Woman with multiple kids who serves as an attempt at Plucky Comic Relief — and sometimes not even that.

A possible subtrope of Who Names Their Kid "Dude"?, Unfortunate Names and Unfortunate Implications if the name is outlandish enough.