You Keep Using That Word 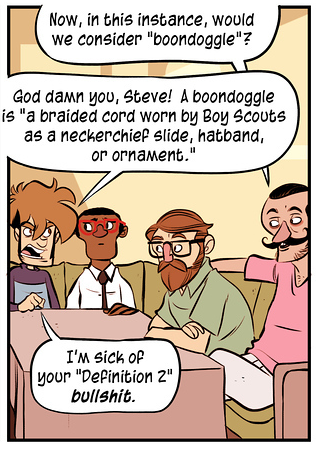 That is what it means.

"You keep using that word. I do not think it means what you think it means."
— Inigo Montoya, The Princess Bride, on Vizzini's use of the word "inconceivable".
Advertisement:

People sometimes misuse words. If another person in the work corrects this misuse, then it tells the audience that something is wrong with the way the first character uses words in general.

The character doing the correcting might range from doing so out of habit, to seeking clarification on the other person's meaning, or maybe they just don't like their native language being abused.

The character making the mistake can do so for many reasons. A non-exhaustive list includes hyperbole, an inflated estimation of their own vocabulary, trouble with idiomatic vocabulary, or is speaking a foreign language.

Compare Personal Dictionary, where either character has a different opinion on what a word might mean, and Insistent Terminology, when a character insists on using a particular term and corrects others. Contrast Buffy Speak (the character doesn't know the "right" words, so they just jam similar-enough words together in hopes the other character understands), Have a Gay Old Time (where the meaning of words shift over time), Neologism (the meaning is unclear because the word is new), and Perfectly Cromulent Word (a word is unfamiliar, but used correctly). For a list of words that tend to cause this reaction, see Commonly Misused Words. In regards to this wiki, see Square Peg, Round Trope.

In a bid to describe what a good potential father he'd be, Adachi says that he'd be "a regular old sugar daddy". This leads to a quick correction from a grossed-out Saeko.

In a bid to describe what a good potential father he'd be, Adachi says that he'd be "a regular old sugar daddy". This leads to a quick correction from a grossed-out Saeko.