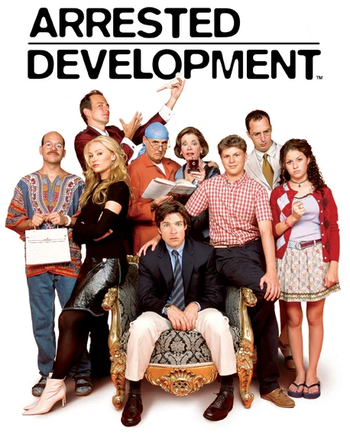 Clockwise from left: Tobias, Lindsey, GOB, George Sr., Lucille, George Michael, Buster, Maeby, and Michael.
"Now the story of a wealthy family who lost everything — and the one son who had no choice but to keep them all together. It's Arrested Development."
Advertisement:

Arrested Development is a single-camera Sitcom, which originally aired from 2003 to 2006.

The show follows the farcical exploits of a wealthy family grappling with the loss of their fortune as the family patriarch is arrested for numerous dubious dealings involving the family business. The show's tone is quick-witted and fast-paced, tempered with a voice-over documentary-style narrationnote provided by producer Ron Howard and coupled with Running Gags, Brick Jokes, nested flashbacks, and other complex narrative structures.

Michael Bluth (Jason Bateman) is the Only Sane Man in a family that doesn't know how to live frugally; he is trying to keep the company afloat and the family together, but his siblings live their lives on a whim. His older brother GOB (George Oscar Bluth II — pronounced "jobe", like the biblical Jobnote although GOB himself doesn't know the correct pronunciation of the Biblical Job) (Will Arnett) is a mostly incompetent magician who performs illusions. Michael's twin sister Lindsay (Portia de Rossi) is a fair-weather activist for whatever cause happens to catch her attention at any given moment; her husband, Tobias Fünke (David Cross), is a disgraced psychiatrist turned disgraceful actor (and appears to everybody but himself to be a thinly closeted gay man). Michael's younger brother, Byron "Buster" Bluth (Tony Hale) is a bizarre Manchild who still lives with his mother, Lucille (Jessica Walter), who is constantly drinking and critical of everything and everyone. Michael's father, George (Jeffrey Tambor), is under arrest for fraud and embezzlement, as well as under investigation for "light treason", and is enjoying his time in prison. Finally, Michael's well-behaved, but also quite awkward and confused son, George-Michael (Michael Cera), and Tobias and Lindsay's rebellious and Street Smart daughter, Maeby (Alia Shawkat), frequently find the rest of the family ignorant of the Unresolved Sexual Tension between them.

The show was brought back for a fourth season on May 26, 2013, exclusive to Netflix. It uses character-focused episodes and Anachronic Order to bring the viewers up to speed on the missing five years of the family's lives. A chronological recut of Season 4 aired on May 3, 2018. This was followed on the 27th of that month by the first half of Season 5 (which had been in Development Hell for a considerable period), which followed directly from the cliffhanger at the end of the previous season. The last half of that season, aired March 15, 2019. The series is presumed to have ended, as years have since passed without a definitive announcement; this is speculated to be due to factors including the sexual harassment accusations against Jeffrey Tambor that emerged in 2017 and the death of Jessica Walter in 2021.

The show has a Wiki on Wikia

and comprehensive coverage on Wikipedia itself

, archived on the Internet Archive, also has thorough coverage of the show's first three seasons. There is a Recap page listing the show's episodes and the tropes used in each of them (still in development).

Not to be confused with the '90s rap group.

Arrested Development in general provides examples of the following tropes:

Buster tells his brother over the landline that he's mad at their overbearing mother...who is listening in on their conversation from the kitchen phone.

Buster tells his brother over the landline that he's mad at their overbearing mother...who is listening in on their conversation from the kitchen phone.