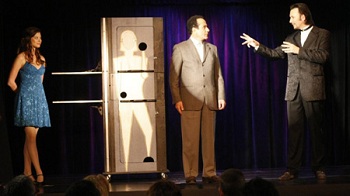 I'm gonna make this OCD-ridden detective disappear. [a few minutes later] TADA! He's... ah, he's gone.
"The magician sealed him in her mystical chamber, waved her hands around and opened the box... the trick was great! Ken was gone."
— Becky, Detective Barbie: The Mystery of the Carnival Caper
Advertisement:

A magician asks for a volunteer in the audience or uses his assistant to place him or her in a regular cabinet. He then closes the cabinet, waves his wand to tap the box, opens it to reveal that the person is gone! A variant has the person then emerge from some other location in the room. It is believed that there is a trap door or a hidden exit in the box (and in the variant, a hidden entrance to the exit location) to make it all an illusion.

A Running Gag in this trope is that the person either escapes or doesn't know how to get back in, leaving the magician flabbergasted and the audience booing. For a more dramatic twist, instead of the volunteer reappearing alive and well, the magician opens the box and a corpse falls out. Sometimes a curtain will be used instead if the subject is bigger.

Since it is a Discredited Trope and easy to perform, the ones that often do this magic trick in media are children. A magician will have to really make it presentable and impossible in order to wow the audience.