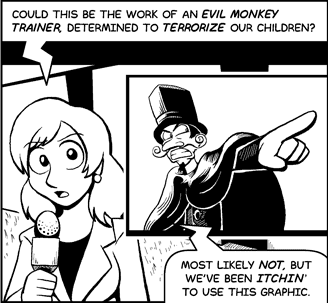 To be fair, it is a pretty awesome graphic.
"Ladies and gentlemen, we've just lost the picture, but… what we've seen… speaks for itself. The Corvair spacecraft has apparently been taken over – 'conquered' if you will – by a master race of giant space ants. It's difficult to tell from this vantage point whether they will consume the captive Earth men or merely enslave them. One thing is for certain: there is no stopping them; the ants will soon be here. And I, for one, welcome our new insect overlords. I'd like to remind them that as a trusted TV personality, I can be helpful in rounding up others to toil in their underground sugar caves."
— Kent Brockman, (over)reacting to

an ant floating towards a camera in space, The Simpsons
Advertisement:

If TV writers need cheap exposition, the easiest way is to have a news Show Within a Show do it. Usually, the news anchors provide a Practical Voice-Over. Sometimes, they do more than that (see Coincidental Broadcast and News Monopoly).

Of course, it gets boring having bland talking heads give information, so animated shows spice up their Practical Voiceover with a little parody. On any show including a fictional newscast intended for adults, you are likely to see anything but a news anchor simply telling the news. Instead, you will see anchors who:

Though live-action comedies do them occasionally, these routines are much more common in animated shows. This may have to do with the fact that animated shows usually use multiple characters per actor, and can afford to have a diverse supporting cast (and also, of course, because it's infinitely easier to have Canon Discontinuity in a show which everyone already knows isn't supposed to be realistic).

A regular feature of the Immoral Journalist.

open/close all folders
Anime and Manga
Asian Animation
Comic Books
Film — Live-Action
Literature
Live-Action TV
Music
New Media
Professional Wrestling
Puppet Shows
Radio
Stand-Up Comedy
Tabletop Games
Theatre
Toys
Video Games
Visual Novels
Web Animation
Webcomics
Web Original
Western Animation
Real Life
"Well, this reporter was... possibly a little hasty earlier and would like to... reaffirm his allegiance to this country and its human president. It may not be perfect, but it's still the best government we have. For now. Oh, yes, and by the way, the spacecraft still in extreme danger, may not make it back, attempting risky re-entry, blah blah blah blah blah. We'll see you after the movie."
Feedback