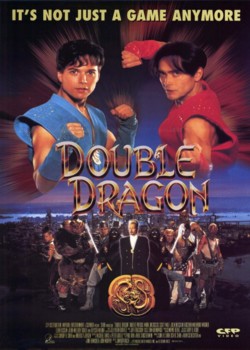 "Thousands of years ago in ancient China, an evil army of shadow warriors... terrorized the great city of Shang-sa. To save his people the good king sacrificed himself to create a mystical medallion. Realizing the ultimate powers of the medallion, the king split it in half. To one son he gave the power over body, to the other, power over the soul. This is the legend of the Double Dragon."
— Koga Shuko
Advertisement:

In 2007, a huge natural disaster known as the "Big One" has left most of California flooded. In the city of New Angeles, a powerful crime lord named Koga Shuko (Robert Patrick) owns one half of a mythical medallion known as the "Double Dragon". When Shuko learns that two young brothers named Billy and Jimmy Lee (Scott Wolf and Mark Dacascos) have uncovered the other half, he orders the entire gang population of New Angeles to go after the Lee boys.

When their adopted mother Satori (Julia Nickson) is killed during an attack by Shuko, the Lees must team with a Guardian Angel-style group of vigilantes known as the Power Corps, led by the police chief's daughter Marian Delario (Alyssa Milano), in order to avenge the woman that raised them and save the city.

See also the Jean-Claude Van Damme movie Double Impact, which is viewed by some as a Spiritual Adaptation of the games.