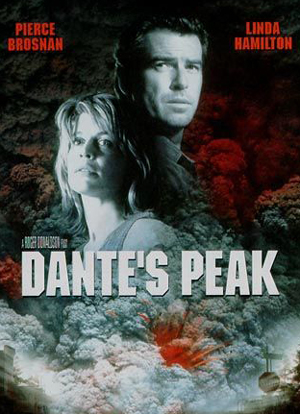 Rising from the ashes...

Dante's Peak is a 1997 Disaster Movie directed by Roger Donaldson, about a volcano set in the Pacific Northwest named, obviously, Dante's Peak. At its foot is a town, also named Dante's Peak.

United States Geological Survey Vulcanologist Dr. Harry Dalton (Pierce Brosnan) is sent to the area to check out the volcano; after a few incidents involving par-boiled skinny dippers and some flirtation with Mayor Rachel Wando (Linda Hamilton), he tries to send the town on alert. Unfortunately, he is shut down by his superior Dr. Paul Dreyfus (Charles Hallahan). The town happens to be second place in the 'most desirable small town to live in the US' list, and they don't want any "crazy" accusations scaring away the tourists, which the town's economy depends on. Besides, there's a million to one chance that it could go off. What could happen?

Surprising everyone except Harry, it erupts.

Unlike so many other disaster movies, Dante's Peak is noted for its relative scientific accuracy, although they did embellish a little for the sake of the action. Some geologists

say they enjoy this movie because they get to see volcanologists in the field and some factual science along with their explosions.