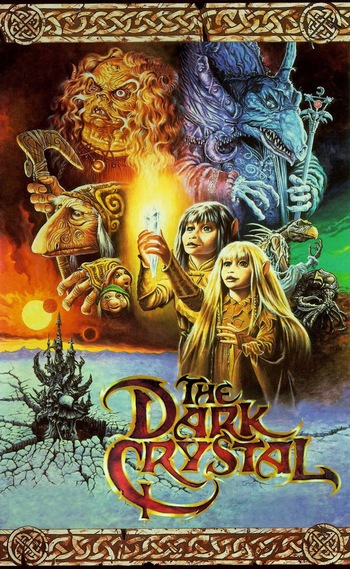 Another world, another time, in the age of wonder.
"When single shines the triple sun
What was sundered and undone
Shall be whole, the two made one
By Gelfling hand, or else by none."
Advertisement:

A 1982 dark fantasy film produced by Jim Henson (of The Muppets fame) and co-directed by Henson and Frank Oz with creature design by fantasy artist Brian Froud. It's inarguably Henson's most ambitious project, created entirely with animatronic puppets and miniature sets, and with a heavy emphasis on Worldbuilding.

One thousand years ago, on the planet Thra, the Crystal was whole. When it cracked on the day of the Great Conjunction of the planet's three suns, two new races appeared: the Always Chaotic Evil and aggressive Skeksis and the Always Lawful Good but all too passive urRu (aka Mystics). A few centuries later, the Skeksis discovered a prophecy that the elf-like Gelflings would heal the Dark Crystal, thus undoing their reign, so they sent their Garthim soldiers to hunt them down and kill them all. All except for the protagonists Jen and Kira, the last of their kind.

In 2013, an "original cut" of the film was leaked on YouTube, featuring extended/deleted scenes, less expository dialogue and the alien language that the Skeksis were originally going to speak until test audiences responded unfavorably to it. Though it was taken down, it still can be found on Dailymotion and Vimeo.

A Netflix-produced prequel series detailing the start of the war between the Skeksis and the Gelflings and the ensuing decay of Thra, The Dark Crystal: Age of Resistance, was released in August 2019.

For the franchise as a whole, see here.

The Dark Crystal includes examples of: