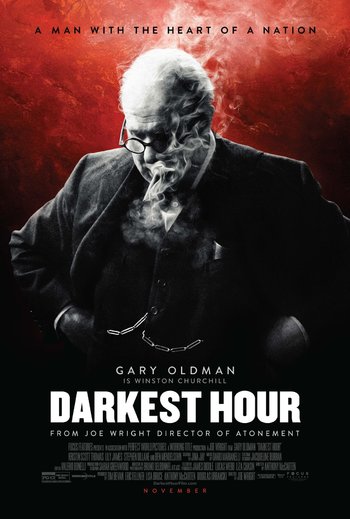 "When will the lesson be learned?! You cannot reason with a tiger WHEN YOUR HEAD IS IN ITS MOUTH!!"
—Winston Churchill
Advertisement:

The film follows the early days of Churchill’s premiership, in the last three weeks of May and the first days of June, 1940. Churchill takes office on the exact same day that Nazi Germany attacks France and Belgium. Three days after that the Germans punch a hole through the middle of the French line and a week after that Hitler's panzers reach the English Channel. A quarter-million soldiers, Britain's entire army, retreats to Dunkirk. Britain faces the possibility not just of defeat but of conquest, with the possible capture of the army at Dunkirk that surely would be followed by a German invasion.

Churchill's instinct is to keep fighting, but a peace faction led by Lord Halifax and previous prime minister Neville Chamberlain wants to ask Hitler for surrender terms before the Nazis land in Britain. Facing political opposition at home and the looming prospect of total defeat, Churchill is pushed to his mental limits during Britain's Darkest Hour.