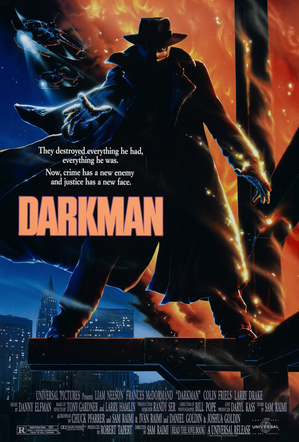 "I'm everyone - and no one. Everywhere - nowhere. Call me... Darkman."
— Peyton Westlake

Years before Sam Raimi brought a certain web-head to the screen, he created his own superhero in this 1990 film. It stars Liam Neeson as Peyton Westlake, a scientist who has invented synthetic skin that, at its current stage of development, will disintegrate after 99 minutes of exposure to sunlight. His girlfriend, Julie (Frances McDormand), runs afoul of gangster Robert G. Durant (Larry Drake) and his thugs, who have him nearly killed. Peyton, now horrifically burnt, uses his own invention against the crooks as his new alter-ego, Darkman.

Two sequels not starring Liam Neeson were made, Darkman II: The Return of Durant (1995) and Darkman III: Die Darkman Die (1996).

The film was adapted to a Licensed Game by Ocean Software in 1991, which was released on Nintendo Entertainment System, Commodore 64, Amstrad CPC, Amiga, Game Boy, ZX Spectrum and Atari ST.

In 2006, Dynamite Entertainment produced a four-part Intercontinuity Crossover miniseries Darkman vs. Army of Darkness, which sees Darkman teaming up with Ash Williams from the Evil Dead franchise.

Strack assumes this trope will prevent Darkman from killing him. Well ...

Example of:
If You Kill Him, You Will Be Just Like Him

Strack assumes this trope will prevent Darkman from killing him. Well ...