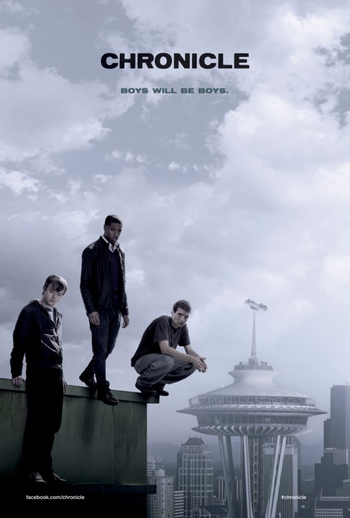 More psychic teens, less xylophone.
Matt: This is the beginning of your downfall. Hubris, right there.
Andrew: What's hubris?
Advertisement:

Chronicle is a 2012 found footage sci-fi thriller drama film directed by Josh Trank and written by Max Landis from a story created by them both.

The film focuses on three teenage boys — the frequently abused Andrew Detmer (Dane DeHaan), his cousin Matt Garetty (Alex Russell) and popular student Steve Montgomery (Michael B. Jordan) — who stumble across a mysterious glowing object in a cave on the outskirts of town. They soon discover that their exposure to the object has granted each of them telekinetic abilities.

As they practice with their abilities, they get stronger with them, and learn to fly and protect themselves from harm. They don't exactly make the instantaneous choice to become heroic pillars of justice, however, and instead use their powers for random pranks and goofing around, as teen boys do.

However, the combination of powers beyond their wildest dreams and long-stewing issues within the group turns out to produce destructive results, and they soon discover that the gifts they have been granted may be drawing out their darker and more dangerous sides...

Following the film's success, a sequel was planned with Landis returning to write, but complications ensued in the years to come that led to a new writer being hired. Trank further admitted in 2020 that he was completely disinterested in making a sequel as well as seeing another director try their hand at one. In August 2021, producer John Davis announced that a sequel was being made; little has been revealed about the film, save that its leads will be women, it will be set 10 years after the original film, and its themes will include fake news and coverups.

Angry at being taunted by a fellow student, Andrew Detmer retaliates by telekinetically ripping three of Wayne's teeth out - and showing them off to his camera.

Example of:
The Tooth Hurts

Angry at being taunted by a fellow student, Andrew Detmer retaliates by telekinetically ripping three of Wayne's teeth out - and showing them off to his camera.