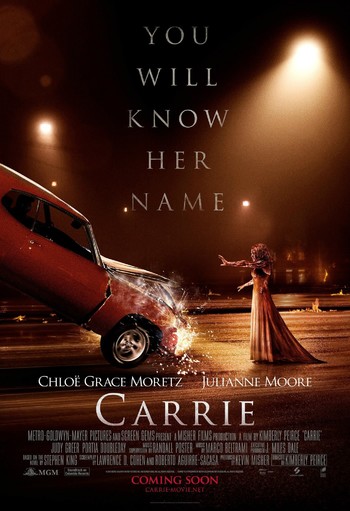 Carrie is a 2013 American supernatural horror film, directed by Kimberly Pierce, and is the third film adaptation of Stephen King's 1974 novel of the same name. The film was produced by Kevin Misher, with a screenplay by Lawrence D. Cohen & Roberto Aguirre-Sacasa. The film was released by Metro-Goldwyn-Mayer and Screen Gems on October 18, 2013. The film stars Chloë Grace Moretz as the titular Carrie White, and Julianne Moore as Carrie's mother, Margaret White, Judy Greer as Ms. Desjardin, Portia Doubleday as Chris Hargensen, Gabriella Wilde as Sue Snell, Ansel Elgort as Tommy Ross, and Alex Russell as Billy Nolan.

The film is a reimagining of the classic horror story about Carrie White, a shy girl outcast by her peers and sheltered by her deeply religious mother (Moore), who uses her telekinetic powers with devastating effect after being a victim of a cruel prank at her senior prom.

"Carrie had some sort of power. But she was just like me... like any of you. She had hopes, she had fears, but we pushed her. And you can only push someone so far before they break."