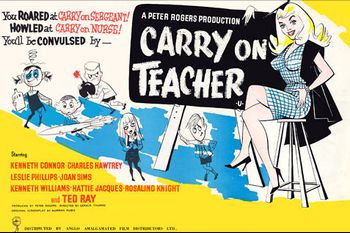 "They've taken the pea!"
— Sarah Allcock discovering her whistle has been sabotaged.
Advertisement:

Carry On Teacher is the third Carry On film and was released in 1959. It starred Ted Ray, Kenneth Connor, Charles Hawtrey, Leslie Phillips, Joan Sims, Kenneth Williams, Hattie Jacques, Rosalind Knight, and Cyril Chamberlain. This movie probably wouldn't have existed if its prequel Carry On Nurse hadn't done as well as Carry On, Sergeant. Once that film became popular, the creators were offered a five-film contract to continue the Carry On series and destroy the box-office. Luckily, this movie was popular enough in the summer of 1959 to carry on the series.

Teacher stars Ted Ray as acting headmaster William Wakefield, who plans to leave Maudlin Street Secondary Modern School for a brand new school near where he was born.

During a meeting, he tells this to his teaching staff - English master Edwin Milton (Williams), music teacher Michael Bean (Hawtrey), gym mistress Sarah Allcock (Sims), science master Gregory Adams (Connor) and maths mistress Grace Short (Jacques) - but is overheard by senior pupil Robin Stevens (Richard O'Sullivan). The students are fond of "Wakie" and his attitudes on canings and so refuse to let him leave, deciding to sabotage any opportunity he has to look good so he'll be forced to stay at Maudlin Street.

The pupils' chance comes soon with the arrival of Ministry of Education Inspector Felicity Wheeler (Knight) and child psychiatrist Alistair Grigg (Phillips). Despite the best efforts of the teachers and caretaker Alf Hodgson (Chamberlain), Hilarity Ensues as the students continually make the school and its staff look as inefficient as possible. Meanwhile, love is in the air for the visitors when Mr. Grigg falls for feisty Miss Allcock, and Mr. Adams nervously tries to court frosty Miss Wheeler.