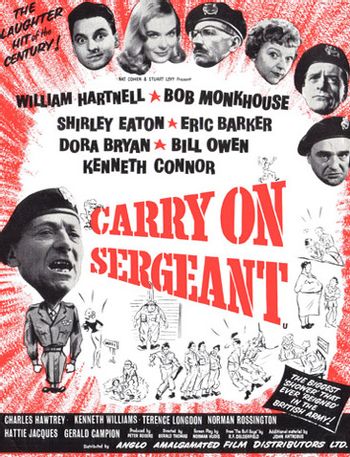 Many claim that the title came from the phrase that the army office would say when misspoken (the US Army equivalent would be "As you were"), however, it's more likely that this film was trying to reference the popular 1957 comedy movie Carry On Admiral. (Funnily enough, Carry On series regular Joan Sims appeared in that movie, but didn't show up in the Carry On film series until this movie's sequel Carry On Nurse.)

Considering that Sergeant was the first movie in the franchise, no one would've known of the success that it would become; the average user that had seen films from the rest of the series before this one would expect the regular cast members like Kenneth Williams and Charles Hawtrey to be the leading actors. This isn't exactly the case.

They are assigned to the calm Sergeant Grimshawe (Hartnell), who is secretly in competition with a rival sergeant over winning an award for the best platoon. He doesn't think that the ignorant men should be verbally abused when they do wrong — unlike the smug and devious commanders Captain Potts (Barker) and Corporal Copping (Bill Owen), who seem to relish roaring at the hopeless men every minute.