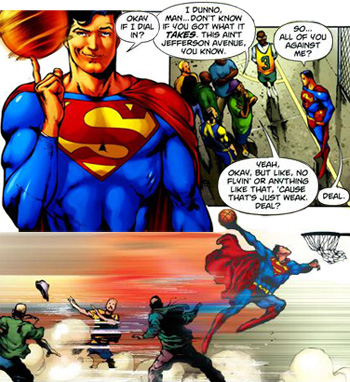 Now you're just being a dick.
"If I was in Superman's place, I'd be totally lording my powers over all the other Superfriends. 'Hey Batman,' I'd say, 'Nice utility belt! Got anything in there that would help you lift an oil tanker? I didn't think so. Hey, Aquaman! You realize I could pretty much kick ass over any sea creature you cared to summon, don't you? Wonder Woman! Your magic lasso makes me tell the truth: You suck!'"
— Book of Ratings
Advertisement:

Normally, Superheroes are modest, and failing that at least they're rarely vain. But then again, if you had superpowers, wouldn't you be the tiniest bit tempted to lord it over the foiled bad guys? Well, the Smug Super thinks so, and in fact he'll tell you about it. At great length. In fact, he won't shut up about it!

The Smug Super is a superhero or villain who knows they've won the Super Power Lottery and won't hesitate to remind others, especially if they're beneath him on the Super Weight scale. This character is similar to the Smug Snake, though rather than being manipulative and sneaky, he's very upfront about his opinion of himself and is an active fighter who is at least on an equal footing with the rest of the cast. Also, unlike the Smug Snake, he can be very enjoyable to see in action for the One Liners they deliver. Likewise, he might fall over the edge into camp. These characters are more likely to experience This Cannot Be! moments than others on the off chance they lose.

In combat, he's likely to hold back, taunt his opponents, and Trash Talk with the best of them. Though he might occasionally suffer setbacks due to his Pride and underestimating opponents. Especially if they're mere mortals.

This trope can also form a mild version of Beware the Superman or being the Superheroic equivalent of the Jerk Jock — in this case, whilst the Super might not actually be malevolent and will still do the right thing, they're still a bit of a bullying, arrogant Jerkass. In more cynical universes, the Smug Super may consider himself — and may even be widely considered — to be The Cape; they very much aren't, however.

Many versions of this trope can be found on Anti-Hero. May be (in fact, quite often is) a target of Break the Haughty, and is generally a "stronger" Arrogant Kung-Fu Guy. Compare with Insufferable Genius (who places their pride more in their intelligence than their strength), Super Supremacist (an even more extreme variant), A God Am I (same), and Small Name, Big Ego (who thinks they're this trope). May overlap with Super Loser when the arrogance is undeserved... either by not having much power, not knowing how to use it well, or not having an ounce of charisma. A Smug Snake is similar but relies more on brains than actual brute force like a Smug Super. Nonetheless, they are as arrogant as the latter. Contrast the Boisterous Weakling, who likes to bark but doesn't have much to bite. Also contrast with Pro-Human Transhuman, who despite their powers, isn't a prick to normal humans. In any case, in a Cape Punk story, you can bet this is likely to be a quality of those possessing superpowers (unless it is the Fantastic Racism humans who are causing the problems).