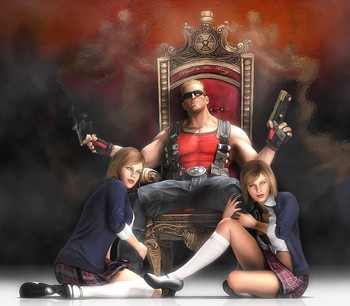 Interviewer: Well, what is it about surfing that you love?
Tank Evans: I love being the center of attention because it's really where I should be.
— Surf's Up
Advertisement:

You all know that arrogant S.O.B. usually pissing everyone off by ranting about how absolutely wonderful they are? This is not that character.

This is the type of narcissist who constantly rants and raves about how mind-blowingly awesome they are, and the fans agree with them.

Often a trait of the Magnificent Bastard, the Memetic Badass, and the Insufferable Genius. These characters constantly spout a Badass Boast. Contrast the Small Name, Big Ego and Smug Snake, who may have an ego, but in their case, it's more annoying than entertaining, and the Boisterous Weakling, who tries to brag even though his weakness is painfully obvious to everyone. Also contrast the Humble Hero, who plays down their awesomeness.

According to the novelization, that line "was spoken not as a boast, but as a matter of fact by one who knew it to be so."