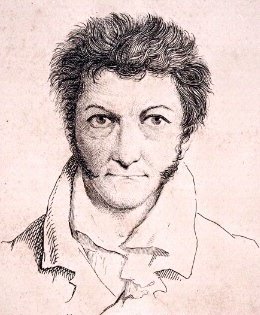 “Why should not a writer be permitted to make use of the levers of fear, terror and horror because some feeble soul here and there finds it more than it can bear? Shall there be no strong meat at table because there happen to be some guests there whose stomachs are weak, or who have spoiled their own digestions?”
— Cyprian, The Serapion Brethren
Advertisement:

Ernst Theodor Wilhelm Hoffmann (24 January 1776 – 25 June 1822), better known by his pen name E. T. A. Hoffmann (he changed Wilhelm into Amadeus out of his admiration for Mozart), was a German author of the early 1800s, the early Romantic era, known for his Gothic and fantastical stories.

Born in Königsberg, Prussia (today Kaliningrad, Russia), he became a lawyer, following the family tradition, though without much enthusiasm, as he was drawn to music, literature and the arts. He entered a career as a civil servant in Prussian Poland, held a position in Warsaw and had a young wife, when, in the course of The Napoleonic Wars, French troops captured the city in 1806 and forced the Prussian administration to flee.

This led to a troubled time in Hoffmann’s life during which he faced poverty, separation from his wife, and the death of his infant daughter, while looking for employment all over Germany. For the following years (spent in Bamberg, Leipzig and Dresden), Hoffmann worked as a theatre manager, music teacher, stagehand, decorator, playwright, and musical director, but neither of these jobs lasted so long or was so well paid as to put him out of financial troubles. In 1813, he was again overtaken by war when the family experienced the Battle of Dresden.

Nevertheless, Hoffmann in 1809/10 achieved breakthrough both as a writer and music critic. But only when a twist of fate allowed him to resume his civil service career in Berlin, he finally enjoyed financial security. He continued to write beside his day job, but alcohol abuse and syphilis – which he had contracted during his wandering years – led to his early death at the age of 46.

Hoffmann is Germany's foremost writer of what has later been called 'Dark Romanticism'. While his lighter works mix fairy tale fantasy with realism, others delve headlong into the grotesque, the uncanny, the supernatural, and horror. Some are simply weird. At the same time, Hoffmann also relished sophisticated satire, self-parody, and wry, ironic humor. You're right, Hoffmann was a European version of Poe before there was Poe.

During his life (and long afterwards as well) he remained a polarizing writer. His taste for Ghost Stories brought him the derisive nickname "Gespenster-Hoffmann" (Ghosts-Hoffmann), Johann Wolfgang von Goethe called his fiction “sick”, and Walter Scott likewise ended an 1827 review of his works with the conclusion that Hoffmann should have sought medical help. Notwithstanding, Hoffmann’s fiction played a key role for 19th century Fantasy, Horror, and the emerging Mystery genre.

Hoffmann's literary fame has also overshadowed that in his own time, he was a fairly respected music critic – particularly known for his reviews of Ludwig van Beethoven – and himself a composer of Romantic music; his probably most ambitious and successful work being the opera Undine.

Several creators have cast a fictionalized Hoffmann as a character in their works, such as Alexandre Dumas in The Woman with the Velvet Necklace and Jacques Offenbach in his opera ''The Tales of Hoffmann'' (''Les Contes d'Hoffmann''), which itself has seen several adaptations.

Works of E. T. A. Hoffmann include:

Stories and Novellasnote Mostly contained in three collections published during his life: Fantasy Pieces in Callot's Manner, Night Pieces, and The Serapion Brethren.

Works by E. T. A. Hoffmann with their own pages include:

Other works by E. T. A. Hoffmann contain examples of: