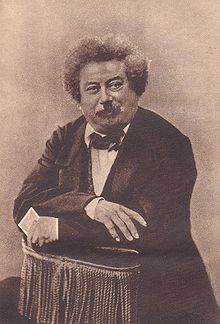 Alexandre Dumas (born Dumas Davy de la Pailleterie, 24 July 1802 – 5 December 1870) was a famous French novelist and playwright of the 19th century. His father was a French general who rose to prominence during the Revolution, Thomas-Alexandre Dumas

, who was nicknamed "The Black Devil" for his courage and African (by way of Haiti) ancestry.

He is best remembered for his historical adventure novels, which include The Count of Monte Cristo and the series that begins with The Three Musketeers.

He is one of the most-read French authors in history, and the second-most translated according to the UNESCO Index Translationum

He is very much the Trope Codifier for the Swashbuckler genre. He was also, quite fittingly, the first French translator of his British equivalent in historical fiction, Walter Scott.

Other works by Dumas, père, include examples of: