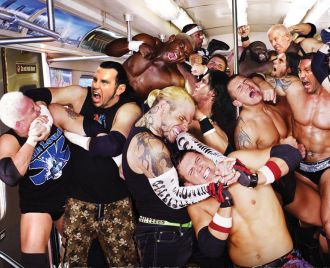 Even the commute is scenery chewing for them.
Advertisement:

Basically, a World of Ham is an entire universe populated by Large Hams and the Hot-Blooded, where everything that happens is extremely dramatic, and every activity is deadly Serious Business, where in every conflict everything is on the line. Not because of the treatment it receives, but because it just works when done that way! Moments of Awesome, Funny Moments, Heartwarming Moments, and Tear Jerkers happen almost one after another, giving works with this sort of setting unbearably high Holy Shit Quotients.

Every factor (characters, plot, pacing...) is configured to produce the maximum possible amount Emotional Torque, the more low-key scenes being used efficiently to make the more dramatic and action-filled scenes all the more breathtaking.

In such a world, you cannot merely act — YOU MUST OVERACT! Scenery… will be chewed — ground to fine dust. Giant cows will be milked to desiccation. Every single line of dialogue will be given as if it were a pronouncement from Heaven itself, or unto the Heavens themselves — WITH! ADDED! EMPHASIS! Every villain will roar, or perhaps sneer, at the pitiful worms who dare to crawl in their divine presence. Furthermore, there's a good chance that BRIAN BLESSED can be found STOMPING around somewhere. In this kind of world, it may seem like everyone's having a ball being as over the top as possible, but, in fact, it is the setting that requires, nay, DEMANDS it… and by GOD, its demands will be met!

Works that take place in a World of Ham tend to be Trope Overdosed, and contain Melodrama, as well as plenty of Ham-to-Ham Combat. They also preclude Evil Is Hammy, as that required just one side to be hams.

For a world actually made of hamlike substance, see Meat Moss. It'll probably be just as badass, though.

At this point, it sounds like the announcer is going into convulsions.

All of Brandon's characters all share a universe (baring a timeline or two) and they are all varying levels of assholish and exaggerated.

All of Brandon's characters all share a universe (baring a timeline or two) and they are all varying levels of assholish and exaggerated.