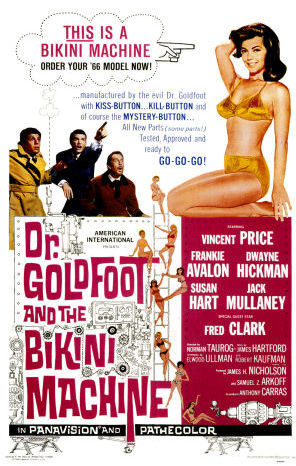 Dr. Goldfoot and the Bikini Machine is a 1965 spy spoof produced by American International Pictures and directed by Norman Taurog, in which the eponymous, gold-slippered villain (Vincent Price), with the "help" of his resurrected flunky Igor (Jack Mullaney), constructs a gang of programmable female sexbots, which are then assigned to seduce and rob various wealthy men. Opposing Goldfoot, sort of, are the (very) low-level government agent Craig Gamble (Frankie Avalon) and one of Goldfoot's targets, Todd Armstrong (Dwayne Hickman). After various comic shenanigans involving Robot #11, aka Diane (Susan Hart), being romantically sicced on our hapless heroes, the film culminates in an extended slapstick Chase Scene through the streets of San Francisco.

This is where things get sort of weird, at least behind the scenes. Somebody decided this movie needed a sequel, and so the next year a bizarre hybrid vehicle was Frankensteined into existence in Italy (where evidently the first film was quite popular), combining the character of Goldfoot, again played by the ever-game Price, with the low-rent (but again, popular) stylings of an Italian comedy duo, Franco Franchi and Ciccio Ingrassia. Fabian meanwhile replaces Avalon and Hickman as the erstwhile hero Bill Dexter, when he can spare a moment or two from his chasing after Laura Antonelli's character Rosanna. The plot this time around involves Goldfoot being hired by the Chinese government to mass-produce exploding female robots in an effort to disrupt a NATO war-games exercise, and then Goldfoot attempting to nuke Moscow and start World War III.

And the man assigned, very much against his will, to direct all this? Mario Bava. Yes, that Mario Bava. The end result was edited into two different films, the English-language Dr. Goldfoot and the Girl Bombs (which focuses more on Price and Fabian) and the Italian-language Le Spie Vengono Dal Semifreddonote The Spies Who Came in from the Semi-Cold (which features more of the Italian duo). Whichever version you're talking about, it's unsurprisingly a strong contender for the dubious honor of being Bava's worst movie, with Price and Fabian both firmly on record as to how awful it was.

Oh, and there was also The Wild Weird World of Dr. Goldfoot

, a 1965 musical TV remake-sequel-promo... thing that aired as an episode of Shindig! on ABC, again starring Price and Hart, with Tommy Kirk and Aron Kincaid taking their turn as the protagonists, and Harvey Lembeck playing Goldfoot's cheerfully sycophantic assistant Hugo.