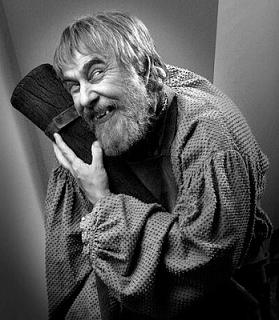 You had him at Grave Robbing.
"It'th a pleathure to be commanded in a clear, firm, authoritative voithe, mithtreth."
— Igor, Carpe Jugulum
Advertisement:

The Igor is the Sidekick and manservant to a Mad Scientist. He's an absolute toady, loyal to a fault, and has no problem doing unsanitary scut-work (such as Grave Robbing) for his genius master, who is always addressed as "Master," sometimes with an impressive lisp. He'll typically be a hunchback, dwarf, or even some small variety of monster. Evil Sorcerers can substitute a tiny imp or demon. A vague European accent and/or a Peter Lorre impression (the closest Lorre came to that sort of role is Dr. Einstein in Arsenic and Old Lace) round out the vocal category.

Igor can't fight (usually), and if encountered by the hero in a combat situation, will high-tail it out with or without his master, unless the master tries to sacrifice him to enhance his own chances. Abduction of helpless young ladies, however, is well within Igor's skillset.

This character is completely defined by Fritz, a character who appears in the 1931 Universal Pictures adaptation of Frankenstein. Fritz is not a book-original character, but was added to the 1823 play adaptation, Presumption: or the Fate of Frankenstein (the earliest recorded play adaptation of Frankenstein and the only one Mary Shelley saw), to have someone Dr. Frankenstein could talk to to convey the story. From there, he was picked up by the film, a choice possibly further motivated by Rotwang's servant in the film Metropolis, from which Frankenstein is theorized to have taken several cues. The name "Igor" comes from a similar character named Ygor (played by Bela Lugosi) who appeared in the second and third sequels, Son of Frankenstein and The Ghost of Frankenstein. Most modern uses and references include at least a subtle twist. Justified for works set during the Steam Age or earlier, as the logical choice of Dumb Muscle for a Mad Scientist would be a deformed, despised and illiterate guy nobody would listen to if he decided to snitch out his master and also who would be cheap.

Is often Working for a Body Upgrade. Can overlap with Satellite Character. Compare to Battle Butler, Crusty Caretaker and Professional Butt-Kisser. For a related trope involving vampires instead of mad scientists, see The Renfield. See also Dr. Fakenstein, who is almost guaranteed to have an Igor employed.