Slip into Something More Comfortable 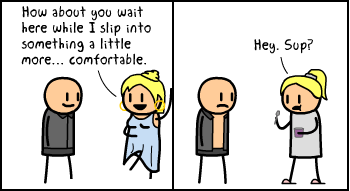 "I'm so comfortable with nudity. It's difficult for me to keep my clothes on just in my normal everyday life. As soon as I walk in the door when I come home, off go the clothes."
— Marliece Andrada, late of Baywatch and Playboy
Advertisement:

The all-time classic line prefacing seduction spoken by our Femme Fatale. "Comfortable" will nearly always mean either naked or the sexiest lingerie scene imaginable, accompanied by some Male Gaze.

Some men will try to use a variation of this as a pickup line. It rarely works that well. There is however a Spear Counterpart that works better in the form of Intimate Open Shirt.

Parodies of this are also frequent, where "something more comfortable" may mean sweats, a sweater and jeans, or any other sort of comfy-but-unsexy attire.

No relation to A Form You Are Comfortable With.