Series / The Thick of It 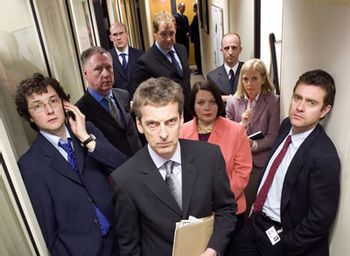 Welcome to Whitehall. Please leave your principles at the door.
"I'm a man of principle: I like to know whether I'm lying to save the skin of a tosser or a moron."
— Malcolm Tucker
Advertisement:

Satirical British Government Procedural produced by Adam Tandy and directed by Armando Iannucci. Debuted in 2005. It is styled as a fly-on-the-wall view of the inner workings of British politics, with natural-sounding, partly improvised dialogue and the use of shaky hand-held cameras. Intended to be as realistic as possible, the writing team employs several Whitehall insiders and every aspect is meticulously researched, from the office décor to the levels of swearing.

There is a lot of swearing.

The show is essentially a 21st Century update of Yes, Minister, reflecting the changes the British political system has been through in the decades between the two shows, in particular the culture of spin ushered in by New Labour's Slave to PR government. While the earlier show commented on the power of unelected civil servants, the later show portrays the government's spin doctors and the media as the most powerful influences. The show also has a distinct anti-West Wing sensibility, sitting at the opposite end of the Sliding Scale of Idealism Versus Cynicism: don't expect sharply-dressed idealists doing their best to serve their voters, this show is all about venal politicians, incompetent civil servants and bad suits.

The show is set in and around the fictitious Department of Social Affairs and Citizenship, the least glamorous and most troublesome of all the Cabinet offices. Created as a "Super Department" with a wide-ranging and varied (read: vague and confusing) remit, it handles everything from housing to crime statistics (read: the boring stuff none of the other departments can be arsed with).

The plot focuses for the most part on the Prime Minister's Director of Communications (read: enforcer) Malcolm Tucker, played by Peter Capaldi, whose job consists of yelling at people in the vain hope that it might stop them from fucking up too badly. The first two series, each comprising three episodes, star Chris Langham as the hapless Minister for Social Affairs, Hugh Abbott MP. They were followed by two hour-long specials: "Rise of the Nutters" and "Spinners and Losers", which deal with the issue of the Prime Minister's impending resignation. The third series introduced Nicola Murray MP, played by Rebecca Front, as Hugh Abbott's replacement following a Cabinet reshuffle. The fourth series started in September 2012, in which the new DoSAC minister is the world-weary Peter Mannion MP, while the party Malcolm is loyal to is now in opposition.

An alternate-universe spin-off movie, In the Loop, was released in 2009, featuring many from the Thick Of It ensemble, but cast in different roles (except for Malcolm, Jamie and Sam, and briefly Angela Heaney) as they desperately try not to get involved in a war in the Middle East after a Minister's gaffe. An American version, titled Veep (being set in the office of the Vice President) aired on HBO in spring 2012.

This show has Loads and Loads of Characters: you can read more about them and how they fit into the British Political System over at the show's Character Sheet.

Very popular in Whitehall, which can only be a bad thing for the UK...