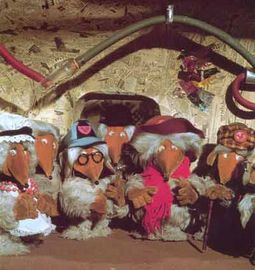 This British children's show, based on a series of books by Elisabeth Beresford, followed a group of furry rodent-like critters from Wimbledon Common, who spend their days cleaning up litter that they find. The group included Great Uncle Bulgaria, Tobermory, Orinoco, Bungo, Tomsk, Wellington, and Madame Cholet, each one had their own quirks and dressed a certain way.

The original series ran from 1973-75 over two seasons and spun off a live-action film, Wombling Free, in 1978.A new series was made in the 1990s, introducing new characters such as Alderney and Stepney.

Not to be confused with Soviet Womble, a gamer and self-proclaimed "Youtube Phenomenon," though this is where he gets his name and avatar.