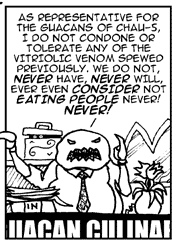 Prince Charming: You're telling me you don't know where Shrek is?
Pinocchio: It wouldn't be inaccurate to assume that I couldn't exactly not say that it is or isn't almost partially incorrect.
Prince Charming: So you do know where he is!
Pinocchio: On the contrary. I'm possibly more or less not definitely rejecting the idea that in no way with any amount of uncertainty that I undeniably—
Prince Charming: Stop it!
— Shrek the Third
Advertisement:

A character deliberately chooses not to avoid using 1 "to use" a convoluted series of negatives to trick a certain reaction out of another character. Usually done when the character has literally no reason not to just lie to them, 2 "might as well lie," unlike in the page quote where Pinocchio's nose won't not grow if he doesn't fail to evade the truth. 3 "His nose will grow if he lies. It won't if he doesn't." No matter how convoluted the question gets, the answer will always be treated as legally binding, despite any reasonable judge throwing half of these examples out.

It's not impossible 4 "possible" to make a Stealth Insult with this type of dialogue, by failing to resist not avoiding insulting 5 "going ahead and insulting" someone in a way that they're incapable of being unoffended by. 6 you know will offend them Alternatively, as in a Sarcastic Confession, it's not impossible 7 "possible" to not promise you didn't do 8 "admit" something while not appearing to avoid denying 9 "admitting" it. This trope is not entirely unrelated to 10 "is related to" Suspiciously Specific Denial. Also not uncommon 11 "common" where Exact Words isn't known not to be 12 "is" in play. I Know You Know I Know conveys a similar degree of semantic confusion. This is also not dissimilar 13 "similar" to No Does Not Avoid Meaning Yes. 14 "No Means Yes"

Finally, it is possible in English for double negatives to convey shades of meaning that positives cannot, as in "unable not to," as not equivalent to "able to." 15 the latter implies the ability to refrain from the action or behaviour in question; the former denies it

open/close all folders
Anime & Manga
Comic Books
Advertisement:
Comic Strips
Fan Works
Films — Animation
Films — Live-Action
Jokes
Literature
Live-Action TV
DJ: There's a summer study program in Barcelona.
Danny: No.
DJ: I'll get to live with a Spanish family.
Danny: No.
DJ: I'll get to study the language and expand my horizons!
Danny: No.
DJ: Doesn't that sound exciting?
Danny: No!
DJ: So, you're not saying that I'm not allowed to not go, right?
Danny: What'd you just say?
DJ: I don't know I just wanted to get you off that "no" thing.
Music

Later lampshaded subtly in verse 2, which has the line "I mean everything I think I just said."

Print Media
Radio
Theatre
Video Games
Web Animation
Web Comics
Web Original
Web Videos
Western Animation
Real Life
Double negatives becoming single negatives
Multiple negation (or negative concord), in which negative forms (for example, negative indefinite pronouns such as "nobody," "nowhere," "nothing") appear instead of their counterparts ("anybody," "anywhere," "anything") in negated sentences is a common phenomenon in the languages of the world. In many languages, it's a grammatical requirement; that is, speakers must say "I didn't see nobody nowhere" (where standard English would have "I didn't see anybody anywhere"), and literally saying "I didn't see anybody anywhere" is ungrammatical.
Feedback

Charming tells Pinocchio to tell him where Shrek is. Pinocchio tries to twist the truth and worm his way out of interrogation with excuses. It works, but the confusing negatives cause one of the three pigs to blab out the truth.

Charming tells Pinocchio to tell him where Shrek is. Pinocchio tries to twist the truth and worm his way out of interrogation with excuses. It works, but the confusing negatives cause one of the three pigs to blab out the truth.