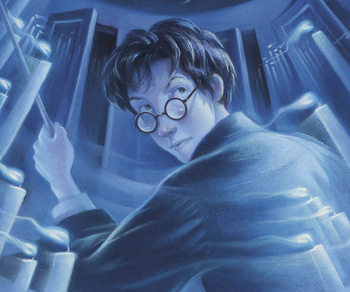 "We are pleased to inform you that you have been accepted at Hogwarts School of Witchcraft and Wizardry."
"Harry — yer a wizard."
— Rubeus Hagrid, Harry Potter and the Philosopher's Stone note Commonly phrased as (per the film version) "You're a wizard, Harry."
Advertisement:

Blending fantasy with the nearly extinct British Boarding School genre, the series was the debut work of Rowling, an ex-schoolteacher. There is a multimedia franchise revolving around them, consisting of a series of films, video games and various other merchandising tie-ins, but at the heart of it are the books.

The basic story is simple: Harry Potter is a seemingly normal schoolboy, living with his resentful, abusive aunt and uncle after being orphaned in his infancy. On his eleventh birthday, he learns he isn't really normal at all. His parents were both powerful wizards, and Harry himself is the renowned defeater of Voldemort, would-be Evil Overlord of the wizarding world. Voldemort had attempted to kill Harry when the latter was only a year old, but for unknown reasons, the curse he cast at the boy afflicted himself instead, killing him... sort of.

Harry goes to Hogwarts, the great school of magic, and is happy. There are the normal school troubles — bullies, unpleasant teachers, a three-headed dog guarding something mysterious — but nothing serious, until he sees a dark shadow creeping through the forest. Investigating, he eventually discovers that Voldemort didn't truly die. Though his body was destroyed, his spirit clung to life, seeking ways to return from death and resume his campaign of terror.

Tropes prevalent across the whole series: