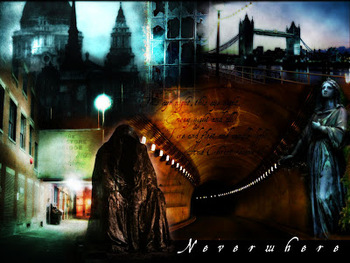 You never know what might exist right under your nose. Or your feet.
Advertisement:

There is a society, which may well resemble the real world at some time in the present or past. And then, alongside that society, there is a whole other social system with its own rules and hierarchies. It may be secret or just obscure, or even merely hard to access in some way. This is the Wainscot Society, sometimes just called a "wainscot" for short.

(Wainscots are wooden panels on the interior walls of houses; the trope name comes from the fact that the secondary society lives "behind the wainscots", sometimes literally. The Trope Namer is an entry in The Encyclopedia of Fantasy,

which discusses many examples.)

The important thing about this trope is that beings living within the wainscot can interact with the mainstream society, and the physical locations of the two populations overlap; this isn't the funny foreign country next door. However, not everyone can move between the two societies, either because they just don't know that the other group exists, because only certain types of being (who may be unknown to or persecuted by the mainstream society) can operate within the secondary group, or because of physical or magical barriers. Exactly how easily it is to move between the two societies varies from case to case, but the transfer must be quick enough that it can be what starts a story; it shouldn't require a whole novel or movie just to make the shift. If it's inconceivable for more than one or two beings ever to shift between the two societies, the trope isn't present. Many wainscot fantasies involve multiple transfers in the course of the story.

It is also required that the secondary society is a fully-fledged society, with family groups and traditions; "ordinary" secret conspiracies and spy agencies don't qualify, and nor do weird parallel dimensions which some characters can enter. If you can’t talk about a second society, it isn’t a Wainscot Society.

Muggles from mainstream society may sometimes blunder into the wainscot by accident, or people or creatures from a wainscot may enter human society bringing strangeness with them. When discovering or entering the wainscot defines the beginning of a hero's story, it functions as The Outside World. Someone who can move unusually freely between the two societies is a Child of Two Worlds. Low-budget Wainscot Societies may have to repurpose a lot of junk from the mainstream society, so the trope sometimes adds a bit of Scavenged Punk.

Sister Trope to Masquerade (a system of intensive secrecy, and therefore one means by which a Wainscot Society in close contact with mainstream society may be kept separate), and Mouse World (a setting full of beings much smaller than normal humanity, who may well form a Wainscot Society). In other cases, the wainscot's population may be based Beneath the Earth, in an Underwater City, on an unusually convenient Island of Mystery, in an Alternate Dimension (maybe a Dark World) to which fairly accessible portals exist, or anywhere else that can somehow permit fairly easy access to the mundane world — or they may just be Invisible to Normals. A really Ancient Conspiracy may have become a fully developed society in its own right; the Alien Among Us might be one of many, who have planted a replica of their home society among humans. The Hidden Elf Village is more detached from the mainstream than this trope requires, though if its inhabitants are forced into increasing contact with the rest of the world, it may be transformed into a Wainscot Society.